Once upon a time in Black Entrepreneur History lived a woman named Rose Meta Morgan who became the founder of the largest African American owned beauty salon internationally – Rose Meta House of Beauty – during the mid 1900s and the founder of one of the most popular cosmetic lines.

Rose Meta Morgan was born in Mississippi on August 9, 1912 to Mississippian parents, Chaple Morgan and Winnie Robinson (Morgan). She was one of nine children, having four brothers and four sisters.[1] They all left Mississippi, moving to Chicago which is where all the children grew up.

By the time it was 1930, her father worked as a Night Clerk at a Hotel while the mother remained a homemaker. Rose, however, had a job, like the rest of her sisters, as laundresses.[2]

As far as her education, she attended the Morris School of Beauty, and upon graduating, she rented space at a local salon where she worked as a full-time stylist before moving to New York after meeting and styling hair for the African American entertainer Ethel Waters.

Her staff had tripled in size, composed of one nurse, approximately twenty stylists and even licensed masseurs. Rose Morgan also launched her cosmetics line called Rose Meta Cosmetics, making her a cosmetics manufacturer. The Rose Meta House of Beauty along with the Rose Meta Cosmetics line were such a hit that she was able to purchase another location years later – adding new departments such as dressmaking and wigs.

Rose Meta, Inc. conquered the beauty industry when her cosmetics line was being sold in Grant’s department store in 1948. Rose Meta Cosmetics were a hit and there was a huge demonstration put on at Grants with is premiere lipsticks, rouges, and creams for Black women. Celebrities attended the event such as Mrs. Nat King Cole, Joya Sherrill, former Duke Ellington vocalist, Fannie Robinson, and Una Mae Carlisle.

Rose Meta Cosmetics were showcased in special sized pink and gray boxes and jars with the name plastered fancily on the boxes for great presentation. Rose Meta Cosmetics ended up in Birmingham, Montgomery, Dallas, Newark and Atlantic City.[3]

Altogether, she owned two salons in New York City at this time in 1955 and employed 135 people. 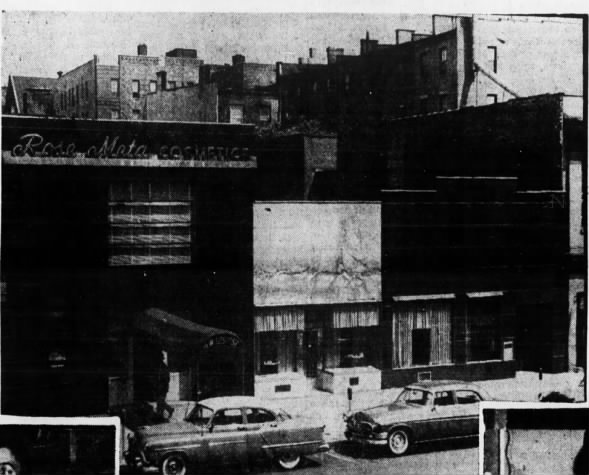 One of her business locations was at 9 West 125th Street in NY.

Not only was she a mogul of fashion and beauty, some newspapers referred to her as the Helen Rubenstein of Harlem.[4]

Rose Meta Morgan had her own column in the New York Age paper called You Heard Me by Rose Morgan in 1955. It was a bright and witty column, targeting women and encouraging them to keep up their beauty while simultaneously marketing her products. Although she was known as a a dominating force in the beauty industry, Rose Meta Morgan also impressed with her journalistic style.

Her column was a favorite across the nation. 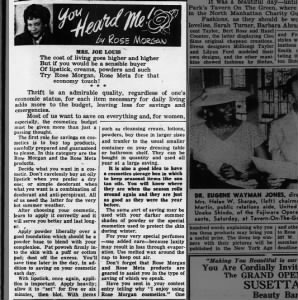 Rose Meta Morgan married Joe Lewis in 1955. He had been married twice prior to the same woman, and she would be his second wife. This would be Rose Morgan’s second marriage, her first being to a man named Peter Coleman in 1936.[5]

There was a big announcement prior to their marriage in the papers at the time that Joe Lewis, also known as the Brown Bomber being the former heavyweight boxing champion of the world, would marry Rose Meta Morgan on Christmas Day of 1955 after Lewis himself made the announcement in Buffalo, New York.

When Christmas Day came around on a Sunday, the couple wed to a company of family and friends that totaled 130 at Rose Morgan’s own home. The ceremony wasn’t long – only six minutes.[6] 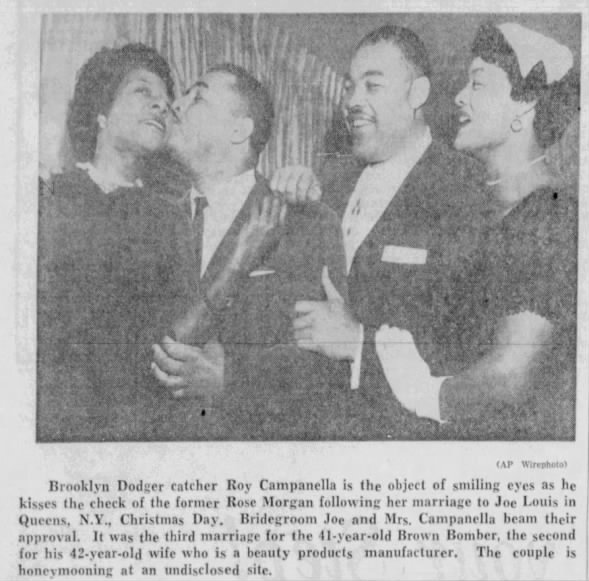 Unfortunately, the marriage was annulled in 1958.

Rose Meta Morgan became a co-founder of Freedom National Bank which was founded in 1965 with founder Jackie Robinson and other investors. It was New York’s only Black-owned commercial bank, serving all races of people. It shut down in 1983.[7]

Rose Meta Morgan passed away in 2008. January 13, 2021 Black Entrepreneur History
We use cookies on our website to give you the most relevant experience by remembering your preferences and repeat visits. By clicking “Accept”, you consent to the use of ALL the cookies.
Cookie settingsACCEPT
Manage consent