Once upon a time in Black Entrepreneur History was an African American man named Alonzo Franklin Herndon who was enslaved with only one year of school education, went on to become founder of one of the most exquisite barbershops in the United States of America and also founder of the Atlanta Life Insurance Company.

Born the son of an enslaved Black woman named Sophenie and a white slave owner Frances Marion Herndon, Alonzo was also born enslaved on June 26, 1858 due to the womb law and the fact that his father never claimed him nor treated him as a son. The place of his birth was Walton County, Georgia near Social Circle.

Two years after the Emancipation proclamation was signed, his mother was set free. Alonzo was 7 years old and his younger brother Tom, 5 years old were also freed, but they ended up struggling in poverty due to them not having anything. Therefore, his mother sharecropped to earn, and as payment, she received food, not money. They had only enough food to keep them alive, no extra.

Alonzo worked hard to help his mother in the fields of Social Circle, Walton County, Georgia, and they survived. Surviving wasn’t enough. He wanted more as he grew to manhood. That was when he moved to make his own way in the world, to find a better way to make it.

He ended up learning the skill of barbering, and then founding his own barbershop in Jonesboro, Georgia. After earning and saving money there, he expanded to open another barbershop, and by the age of 24, he moved to Atlanta.

The following year in 1883, he had multiple barbershops, earning much income, and it was in 1893, he married Adrienne Elizabeth McNeil, a teacher electrician, according to the 1900 census, who in her acting career, felt compelled to pass for white and did, though Black. It was how she could get the opportunities to be on stage, which was her dream[1].

It was in 1902, though, when Alonzo founded The Crystal Palace, which he built to be his most elegant and exquisite barbershop of all the shops he owned, to be the most lavish one in the entire United States of America.

Alonzo’s entrepreneurial spirit led him to not only own multiple barbershops and end up detailing, furnishing and operating the finest barbershop in the nation, but he also decided to become a real estate investor.

In 1905, he bought Atlanta Benevolent and Protective Association for $140[2], which ended up becoming through his founding the Atlanta Mutual Insurance Association. From there it went on to become Atlanta Life Insurance Company, one of the few African American insurance companies to reach legal reserve status and operating in six states in the South by 1924. Today, it remains one of the largest African American owned financial institutions in the USA.

While this was happening, in 1910 not only did he build a beautiful, 15 room classical home, but his wife also passed away in that same year. Two years later on May 3, 1912, he married again, to a woman named Jessie Gillespie. It is uncertain how long they remained married.

The Crystal Palace opened to the public on 1913 after it was completely built and furnished. Alonzo opened the barbershop to the public with a full orchestra and souvenirs for visitors. 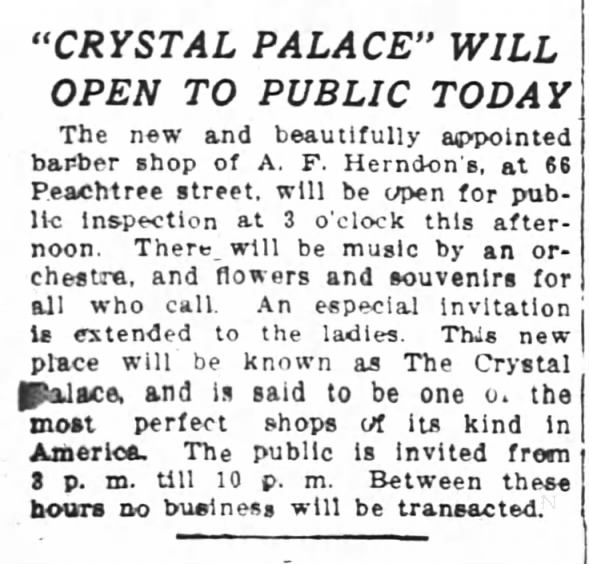 The Crystal Palace was located on 66 Peachtree Street and had an elite clientele list – attorneys, doctors and congressmen. All the barbers were highly skilled African Americans, however, all of his clientele were all white men. Segregation was still alive and held a very strong hold in America at the time, and according to PBS Historical video, “Alonzo couldn’t get a hair cut in his own barbershop”.

Once they entered, clients would be visually served with crystal chandeliers, large mirrors and more than two dozen leather upholstered chairs in the two story black owned barbershop, with 20 baths on the bottom floor. The barbershop also had the very first plate glass windows in the city of Atlanta. The business was spectacular and the cleanest and largest around.

His businesses and real estate ventures, over 100 properties, made him the 1st Black Millionaire in the city of Atlanta, Georgia.

After the expansion of his empire and 15 years after he remarried, he passed away on July 21, 1927 at the age of 69. He was buried in Atlanta’s South View Cemetery.

His son, Norris Bumstead Heardon became president of the company at his death. The Atlanta Life Insurance Company is located today at 191 Peachtree Tower.

The home of Alonzo Herndon is a National Historical Landmark in Atlanta.