Once upon a time in Black Entrepreneur History was a young African American boy named Ottowa W. Gurley, born to formerly enslaved parents who grew to become a great entrepreneur and real estate tycoon as well as the founder of what was known then as the Greenwood District aka Black Wall Street in Tulsa, Oklahoma.

Born on Christmas Day, December 25th of 1868 in Hunstville Alabama, only five years after the Emancipation Proclamation was signed into law, Ottowa was the son of John and Rosanna Gurley.

He grew up in Pine Buff, Arkansas which is the same place he met and married his wife, Emma[1], and began working at a Post Office. It was in 1889, that he and his wife decided to venture off and travel to Oklahoma. The whole reason they set off to Oklahoma was because that was the area of opportunity in the Oklahoma Land Rush.

There was land being set aside from the government so that people could lay claim and build upon it, so Gurley wanted in. Of course, the land was segregated by law. White people had their land and there was land that was reserved for sale to only Black people. O.W. Gurley claimed that land in Perry. From there he founded his own Grocery store and ran it for ten straight years.

He lived on 425 B Street in Perry, and at this time, he’d been married for 9 years already[2]. Life was good, but not good enough. He wanted more.

Therefore in 1905, Ottowa Gurley sold his store and the land he bought in Perry, Oklahoma and moved to Tulsa, Oklahoma where people were striking it rich due to oil. Again, Gurley wanted in, and he had the revenue to get started.

When Ottowa arrived in Tulsa, he wasted no time in purchasing 40 acres of land that was reserved for Black people only. His mind churned with the opportunities that came with forced segregation. He would begin to build strictly for his people, an area where they could come without having to deal with Jim Crow laws and racism always beating down on them.

Therefore, he started diving more into real estate, becoming one of Tulsa’s Black real estate tycoons, opening his first business – a rooming house where people could move in and share amenities. This was a huge success as African Americans wanted to escape Jim Crow and come live in an all Black area in safety so they could thrive. This safety net came on the road that Gurley and others named Greenwood Avenue. This was going to be known as the Greenwood District – completely owned, operated and sustained by African Americans. It was a total success.

Gurley began to issue loans to Black people who needed the capital to launch businesses and start a new life for themselves. Other properties O.W. Gurley built were:

He also teamed up with another African American entrepreneur and real estate mogul J.B. Stratford, son of freed enslaved parents out of Canada, who graduated from Oberlin and Indiana Law School. Gurley and Stratford ended up growing Greenwood District into an even bigger deal, with more businesses, including Stratford’s hotel – the Stratford Hotel – which ended up being the largest Black-owned hotel in America during that time. The Stratford Hotel included the works, from 54 suites, pool hall, gambling hall and more, worth in today’s dollar – millions.

Other entrepreneurs and businesses in the Black-Owned Greenwood District included:

In 1920, Gurley was huge in real estate as a broker. He had no children, and his wife Emma was the manager at the Gurley Hotel. By 1921, O.W. Gurley’s net worth was about 15 million to 20 million today.

All was burned to the ground and scores of Black people murdered in the Tulsa massacre of 1921 when thousands of white people in one big mob crossed the railroad track – the only thing that separated the whites from the blacks.

O.W. Gurley along with every single Black entrepreneur and family lost literally everything they’d worked for because it was all burned to the ground into ashes. Many even lost their lives. The Fort Worth Star Telegram likens the massacre to Hiroshima which happened 24 years later.

A white woman came into the district, lied on a black man which enraged the large white population that surrounded them after hearing the rumor that she was raped by a black man. White people came in and began to slaughter the people and destroy what became known to everyone in the nation as BLACK WALL STREET, the phenomenal place that stood Black-owned, prideful, beautiful, hardworking and wealthy for 34 full blocks and over 1000 buildings.

No white people were detained. The white mob came, killed and detained Black citizens all off of the lie of a white woman. Bodies were left bloody and burned to the bone, laying near the railroad tracks, buildings and rows of family homes were left smoldering, Black men and women were marched out of the city at gun point to places unknown to this very day, illegal searches were performed and more atrocities. [See all pictures]

A survivor, Mary E. Jones Parrish, wrote a book the following year detailing all of what took place, titling the book Events of the Tulsa Disaster. The book includes pictures and her own account. 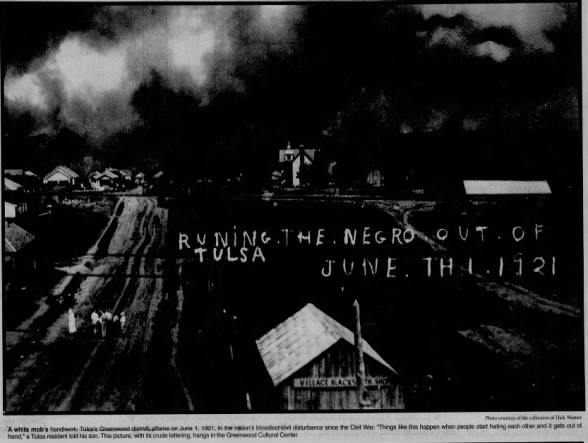 O.W. Gurley and his wife escaped without being killed, and there is proof of this in the state of California records[4] where he was recorded as having moved there after his loss and founded yet another hotel and bought a home for about $9000 on 736 East 33rd Street. His wife was listed on the 1930 census an unpaid maid at the hotel that he owned, but she was basically a co-owner and willing participant in its upkeep.

There is also record of him being a registered Democrat in 1934 at his California home address.

NBA Star LeBron James is to produce a documentary on the Tulsa Massacre, some call Tulsa Race Riot, in 2021.

On October 21, 2020, a Tulsa Massacre mass grave was found and excavated.