Once upon a time in Black Entrepreneur History was an African American lady named Mary McLeod Bethune who endured severe poverty as a child to becoming advisor to Presidents of the USA and founding the Daytona Normal & Industrial Institute, to later be known as the Bethune-Cookman College.

Mary McLeod Bethune was born in Mayesville, South Carolina on July 10, 1875, twelve years after the Emancipation Proclamation, a daughter of parents who were formerly enslaved.

Out of 17 children, Mary was the 15th, but despite their poverty and having to work the fields day in and day out for survival, education became a priority. They did their best by sending Mary to the only African American school miles away from home each day.

Mary had to walk the distance to Trinity Presbyterian Mission School, and the whole time there, she learned and took her knowledge back home to teach her siblings and parents. She was already an educator as a young girl, and this would follow her for the rest of her life.

After leaving Trinity, she went to Concord, North Carolina to Scotia Seminary and graduated in 1893. From there, she went to Moody Bible Institute in Chicago, Illinois, and finished school in 1895. She was an official educator/missionary at this point, and she moved back down south to make a world of difference to the people living under the wicked arm of Jim Crow.

She taught at schools in Georgia and South Carolina, but she had a strong desire to start her own school after working with Lucy Craft Laney at the Hanes Normal and Industrial Institute which Laney founded and operated in Georgia.

During this time she married a man by the name of Albertus Bethune, however, she was widowed in 1918 when he passed away. They had a son – Albert Bethune – who went on to marry a lady named Margaret, and from them, she had a grandson named Albert,II.

Founding Her Own School In Florida

The Daytona Normal and Industrial Institute for Negro Girls was founded in 1904, and not only was Mary McLeod Bethune the founder, but she was also the principal. According to the ad in The Daytona Daily News, she was mimicking the famous Booker T. Washington school in Alabama – Tuskegee. She wanted girls to grow up and know how to be self-sufficient and independent.

Mary McLeod Bethune constantly advertised for students in order to legitimize and grow her school for girls, even when the school only had a handful of pupils in the beginning. She quadrupled her pupils in one year, gaining support from the church and donors, coming all the way from the President Roosevelt himself eventually. She also became a speaker, lecturing at different venues and even inviting white people to attend as well. 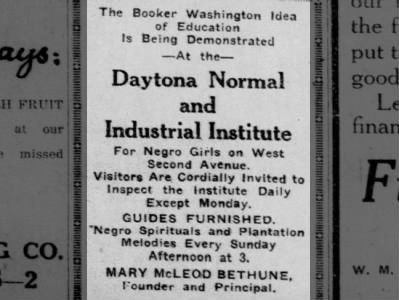 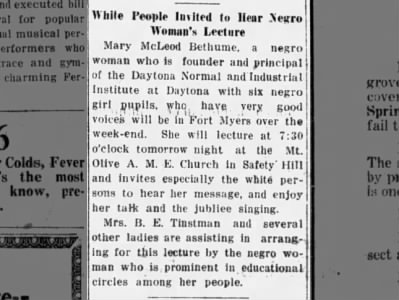 As a matter of fact, in 1923, for the celebration of Emancipation in Daytona which was put on each year, Mary McLeod Bethune was the chairman of the Emancipation Commission, and it was recorded to have been the “most successful Emancipation Celebration in the history of Daytona.“

Every Sunday school and choir in Daytona was represented. The children of the kindergarten and Sunday Schools made a beautiful picture, crowded upon the gayly decorated floats. Truly as one gazed upon them, bright, intelligent, happy, one realized that they were indeed “the Black Hope.”

The Daytona Normal and Industrial Institute made a splendid showing, every department being well represented.”

Businesses, men and women, laborers and farmers, all were on hand, demonstrating real progress of the race.”

Mary McLeod Bethune was an all or nothing education entrepreneur, or as some could say, an edupreneur, and she desired with her whole heart to help move the African American race forward after they had been tied down for so long, herself knowing what poverty tasted and felt like.

After opening her school in 1904, by 1920, she had four teachers, a bookkeeper, nurse and also a store keeper (her niece).[1] Her school was well known and she’d even made herself known later to the Federal Security Agency in Washington D.C as she was listed under the Nation Youth Administration as Director of the Division of Negro Affairs while located in Florida, with a compensation of $6,000. in 1941.[2] She would advise the president of what the needs were in the African American community. She would go on to advise 5 presidents and become personal friends with President Franklin Roosevelt.

By 1923, the school combined with Cookman Institute which was founded by Rev. D.S. Darnel in 1872 (making it the first African American educational institution in Florida), and became co-ed, which later became Bethune-Cookman College in 1943, then to Bethune-Cookman University in 2007.

In 1911, Mary McLeod Bethune founded the 1st African American Hospital in the city of Daytona, Florida after becoming sick of Black people being mistreated in healthcare. It reached a boiling point when one of her students got sick and didn’t get proper care. She raised money and found a small piece of real estate where she would convert into a hospital.

She already had nurses at her school, but as the hospital grew in carrying capacity, she hired both black and white physicians. The hospital was called the McLeod Hospital. They worked wonders for both children and adults.

She founded the National Council of Negro Women in NY and co-founded the United Negro College Fund while stepping up and defending the right to learn integrated, not segregated, under what is supposed to be a Democracy. She believed there should be equality and no division. She made her voice known all the way to the Supreme Court during Brown vs. Board of Education.

Bethune passed away of a heart attack on May 18, 1955 and was buried in Bethune-Cookman College campus grounds in Daytona, Florida.

Her life is remembered with full honors as her contributions to the lives of African Americans still lives on today.